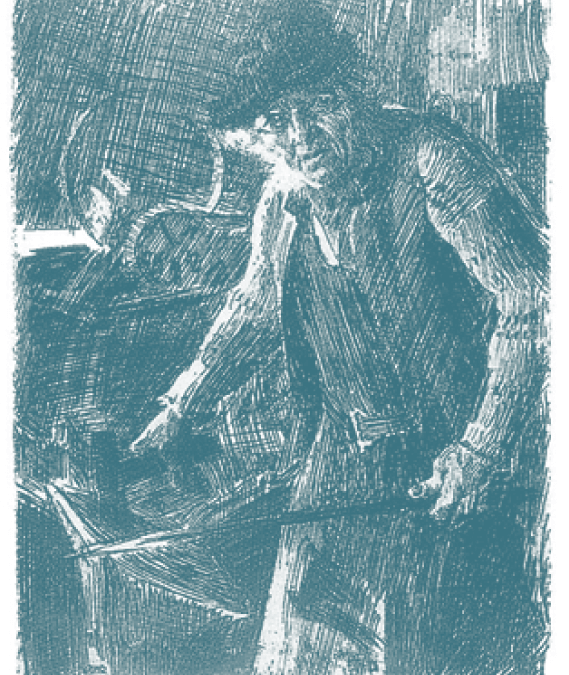 A couple of miles from Sars Per Persson’s smithy lived Anders Zorn (1860-1920), one of Sweden’s foremost artists who obtained international success as a painter, sculptor and printmaker in etching. The smith seen in the Sepson logo is a silhouette from the Zorn etching “Master smith” created in 1907 after an oil painting that Zorn made of Sars Per in the smithy. Sars Per was known to be strong as an ox and very accurate in his work and this is a heritage that we work every day to keep up.

In November we celebrate our 120th anniversary! Since Sepson was founded in 1900 the company has continued to grow and evolve to the global supplier of winches and systems that you all know us to be, and we would like to take this opportunity to let you know how proud and thankful we are for the long-lasting relationships and partnerships we are continuously forming together.

Long-standing tradition of skilled workmanship
When Sars Erik Peterson started the company “S.E. Petersons Mek. Verkstad” [S.E. Peterson’s Engineering Workshop] in Orsa in the middle of Sweden it was founded in a strong tradition of skilled workmanship, both in his family and in the region of Dalarna. His father, Sars Per Persson, was a Master Smith known to be strong as an ox and very accurate in his work. Sars Erik himself developed his skills and visions even further after a visit to Minneapolis, USA, where he at the age of 18 began working in a locomotive factory. When he a few years later returned home he founded the company. The mission was to make tools and handling equipment for the surrounding forestry industry where pulling and lifting are key activities.

In 1933 another workshop was built in Vinäs and in 1949 the company was converted to a Limited company. The order books were filled to the brim and in 1955 an additional factory was built in Vansbro. Ten years later yet again a new, modern factory was established in Mora, and since 2013 Sepson is a part of the LS Technologies corporate group.

Going forward together
Today, 120 years after the start in Orsa and with subsidiaries, partners and end users all over the world, the heritage of skilled workmanship and visionary thinking from Sars Erik and Sars Per is still at the core of Sepson. And while celebrating this milestone of 120 years, we look forward to continuing on this journey of innovative development together with you.

Sars Erik founded the company to make tools and handling equipment for the forestry industry in the region of Dalarna, and from there the company has grown into a worldwide supplier of winches.

The timber loader “Record” from Sepson, from the 1950s.

Sepson was early in developing remote controlled winches. This farming tractor Massey-Ferguson from 1968 is equipped with a radio controlled winch from Sepson and can be seen at the Forestry Museum in Siljansfors.

The 1970s saw the development of our winches with a patented dual motor framework and automatic two speed, leading to better spooling and longer cable life.

In the 1990s, we developed our automatic rope spooling device. The attachment spreads the rope evenly across the drum, making sure the drum width is fully used and preventing the formation of “nests”.

In 2014, Swedish private equity company Lidan Marine acquired Sepson AB and the company LS Technologies was founded. The joint goal is to combine resources to develop new designs and system solutions, and lead the technical development in marine and land-based military and commercial industries.

Sepson has a unique position in India – one of the fastest growing markets in the world – with local manufacturing and outstanding customer relations, and in 2015 we took the next step in the region and founded Sepson India. 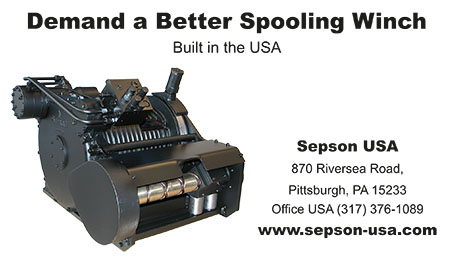 To further strengthen our position as a global supplier of heavy duty pulling and lifting equipment, and as a first step into the American market, LS Technologies acquired Pittsburgh-based Patterson Manufacturing in 2016 and founded Sepson US in 2017.

Constantly looking for new ways to improve and simplify the work for civilian and military users, launching our new Septrac at Eurosatory in Paris in 2018 was a great milestone. This two-unit traction constant pull winch is really next generation.

Carrying a rich and proud history, and looking forward to continuing our journey of development and innovation, this year we invested in new facilities in Vansbro, Sweden. We moved into our new offices and top modern assembly plant, complete with a brand new paint shop, in August.